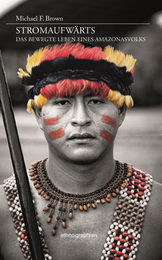 Upriver is now out in a German edition published by Konstanz University Press.

20 December 2015.  A review of the German edition appeared in the Frankfurter Allgemeine Zeitung on 18 December.  (PDF copy here: faz_review_reduced.)  My German-speaking friends tell me that it’s a favorable review.  It contains a factual error, however:  Evaristo Nugkuag does not serve as a member of the Peruvian parliament; it’s Eduardo Nayap as stated in the book.

The following excerpt from Upriver brings together several of the book’s key themes and narrative strategies:  (1) close-in description of an emotionally charged event; (2) my attempt to unpack the complex interweaving of grief, loyalty, rage, and suspicion that characterized many important events; and (3) the difficulty of separating any one of these events from the history that preceded it, including previous deaths that were either overt revenge homicides or illness-related deaths thought to be caused by hidden sorcerers.

One thing worth noting is that the emotional tone of this funeral for an adult contrasted markedly with funerals for infants.  Infant mortality was so common that only the dead child’s parents seemed strongly affected by it.  –MFB

Even a hundred yards short of the settlement the sounds of grief were unmistakable: the keening of dozens of women punctuated by shouts and wailing from men. The tumult failed to convey fully the intense anguish visible in and around the dead man’s house. Adults and children milled about outside, some peering inside through gaps in the palm-wood slats. Inside the house, which was divided in half by a partition, fifteen people paced back and forth, the women weeping or screaming, the men talking in loud voices about their sadness and their willingness to avenge the death if it was shown to be the result of sorcery.

The body lay on a sleeping platform in the second room, covered by rags and scraps of blankets. Only the lifeless face was visible, flanked by two burning candles. A copy of the Awajún translation of the New Testament, open to one of the color illustrations, rested on the blankets. Mourning women surrounded the body. One climbed on the platform and kissed Héctor’s face, keening in a high-pitched wail. Men walked in from the adjacent room and shouted, as if to the dead man.  Approaching the door, we saw a sudden scramble as a female mourner tried to run outside. “She wants to kill herself!” someone shouted. A man grabbed the woman by the hair before she could slip away. She kicked, struggled, and screamed frantically. The most stricken women, including the dead man’s widow and sister, were shadowed by male guardians. Once or twice these women made sudden dashes toward the edge of the settlement, but they were dragged back before they could harm themselves. The suicidal behavior was more than ritual drama: family histories included many cases of women who had committed suicide in the throes of extreme grief.

Outside, visitors continued to arrive from other communities. Mishít, alone with Héctor’s body, fanned his face while moaning, “My little brother, my little brother.” Late in the morning there was a flurry of activity around another house in response to a rumor that Héctor’s widow had tried to hang herself there. This proved untrue. A more credible story was that a grieving relative had attacked her for failing to take care of him properly. Others intervened to stop the assault, including a pregnant woman who took a blow to the stomach.

The dead man’s relatives debated how to bury him. In the past, adults were often interred in their houses, which were then abandoned and allowed to collapse on top of the grave. It was said that the corpse of a kakájam, a senior man whose success as a killer identified him as a vision-bearer, was left seated upright on his wooden stool, lashed to a house post. Young vision-seekers who could overcome their fear of the dead and endure the stench of a rotting corpse would spend a watchful night in the house in expectation that the deceased’s vision might pass to them. Resettlement in tightly clustered villages made such customs impractical.  In the absence of other options, Úwek, the dead man’s uncle, recruited some youths to help him carve a rough coffin from a trunk of balsa wood. Where it would finally rest was a matter to be resolved later.

Within a day, information about Héctor’s medical history trickled into Alto Naranjillo. Some stories described the death as a sudden, catastrophic affair. A more informed version came from a bilingual paramedic, the only indigenous health care worker in the region. She had treated Héctor for chronic dysentery for months. He recovered from a previous acute episode but was showing signs of malnutrition. When the second attack came, she sent an emergency request to the Rioja hospital for medicine to control Héctor’s vomiting. What arrived instead was two ampules of a pharmaceutical used to treat rheumatism.

Héctor’s death was tailor-made for accusations of sorcery, but his status as an innocent victim was complicated by the recent murder of the accused teenage sorcerer from the Río Potro. Héctor, too, had been named as an accomplice to the alleged sorcerer, which made him a target. He managed to elude a posse of would-be killers after being tipped off by relatives that an assassination plot was afoot. When the other accused sorcery culprit was murdered a day or two later, interest in killing Héctor seemed to have waned . . . .

The convoluted stories associated with Héctor’s final months defied efforts to make sense of his death. Was he killed by a sorcerer from the Río Potro region, perhaps to avenge the death of the young man who had been murdered earlier that year? Or was the sorcery a local matter engineered by one of the men involved in the failed attempt to assassinate him? There were wheels within wheels of grief, mistrust, divided loyalties, and simmering grudges. They overwhelmed people’s capacity to assign blame or settle on a compelling explanation. In the end, perhaps the maze of conflicting narratives was more consoling than a banal fact: that the immediate cause of Héctor’s death was a pharmacist’s clerical error.

The linguist Daniel Everett has just reviewed Upriver for the online and print versions of New Scientist.

Everett describes the book as “even-handed and insightful,” and “one of the best books I have read on Amazonian peoples in a long while”—written, he says, with “flair and clarity.”

This is high praise from a scholar whose own recent books, including Don’t Sleep, There are Snakes, and Language: The Cultural Tool have garnered both a wide popular readership and sparked one of the most interesting and fiercely fought debates in modern linguistic theory.  (A 2007 New Yorker profile of Everett and his research lays out many of the insights of his work in the Brazilian Amazon and why it has generated so much controversy among linguists.)

Everett correctly points out that Upriver concerns itself, among other things, with the question of what it means to be “civilized,” both historically and today.  Indeed, an irony central to the book is that the violence that was once so prevalent in Awajún society, and which lives on today in attitudes if not in actual practice, has arguably outfitted the Awajún people to withstand and sometimes prevail over the interventions of a developed world that smugly considers itself more advanced and “civilized” than the indigenous peoples it would happily steamroll into extinction.

As for the broader problem of civilization and violence, one is tempted to ask: How “civilized” is a United States that accepts as inevitable the firearms-related deaths of tens of thousands of people annually based on the pronouncement of a legal document written over two centuries ago at a time when the only firearms to which most people had access were black powder muskets?

There is one aspect of Everett’s review that merits correction, however. He states that [according to Brown] “more than half of all deaths of Awajún men are due to murder, while more than a third of deaths among Awajún women are suicide.”  These percentages should be reversed: the book notes (p. 214) that my small and largely retrospective sample of remembered deaths found that about a third of male deaths were reportedly due to homicide and slightly more than half of the deaths of adolescent and adult women were attributed to suicide.

The book presents those figures as rough percentages based on a total of 134 cause-of-death reports, a tiny sample by the standards of modern demography.  More important still, these data were recorded in 1977-78 and document deaths that stretch back in time to the 1940s. So they do not accurately reflect Awajún circumstances today.

More unsettling than the prevalence of homicide in the distant past, which has numerous parallels in other societies living in what Brian Ferguson and the late Neil Whitehead called the “tribal zone”—that is, the often chaotic interface between indigenous peoples’ heartlands and the expanding state frontier—is the suicide rate.  Suicide, especially among young women, remains a problem in Awajún country to this day, although there is reason for cautious optimism about its trajectory according to some reports.  (A recent UNESCO-sponsored study of suicide in Amazonian societies considers the Awajún case in some detail.  The report, published in Spanish, is downloadable here.)  As Everett notes, suicide threats and attempts are not uncommon in Amazonian societies where women have limited power to influence their husbands, although the Awajún seem to have developed this strategy to an exceptional degree.

The second review appears in the October 24, 2014, edition of the Times Literary Supplement, which unfortunately remains behind a pay-wall for the time being.  The reviewer is John Hemming, a prolific and distinguished historian of the Amazon.

Hemming judges Upriver to be “powerful, moving and entertaining,” an assessment that I’m happy to leave unchallenged.  There is one contextual problem that grates a little, though.  Hemming quotes me as claiming that a village in which I lived was “a breeding ground for sorcery, lechery, and drunkenness.”  In that passage I am not expressing my own opinion but that of a moralistic Awajún teacher who had converted to evangelical Protestantism (p. 135).  In Upriver I take great pains to communicate my admiration and affection for the Awajún among whom I lived even if, like the rest of us, they have their share of flaws.

Anyone who has had a book reviewed in the trade press, even by first-rate thinkers such as these, knows that there are often disconcerting problems of contextualization and emphasis.  Given the current state of publishing, I feel fortunate that Upriver and the ongoing story of the Awajún people are receiving attention in publications of this quality.